About the Welsh Charitables RFC 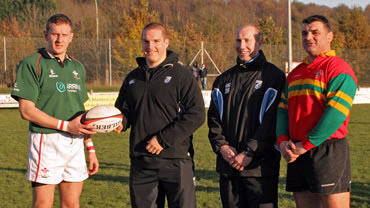 Allow me introduce to you to the Welsh Charitables RFC and the work we do for charities throughout Wales.

Through the medium of rugby the Welsh Charitables RFC itself a registered charity raise money for a number of worthy causes such as St Anne's Hospice, WREX The Welsh International Former Players Association, Ty-Hafan the family hospice for young lives, The Prince's Trust Cymru and St David's Hospice Care and since we re-formed in December 2000 we have donated in excess of £120,000 to such worthwhile causes.

All positions within the Charity are voluntary, which means that ALL monies raised go to our chosen charity.

This has been due to the various fundraising activities we have organised which have been supported by a number of businesses and the general public by sponsorship and attending our charity functions. We annually hold a Sportsmen's Dinner, a Tribute Dinner to a former International Player and a number of fund raising charity rugby matches.

We have also involved ourselves in the identification and development of young Welsh players through the 15 and 7’s side game at numerous age groups. We have endeavoured to select young players on the fringe of full age grade International Honours to enable them to further press their claims for a cap all selections are made in consultations with the WRU and Regional Academy Managers.

Do you want to be a part of the Welsh Charitables RFC?

Why not become a Vice President and get regular updates on all our forthcoming events. To find out how, contact Peter Ebenezer, Hon Board Secretary at peterebenezer5@gmail.com.